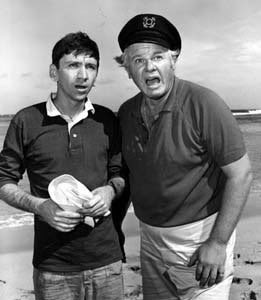 Except, of course, only if most of the passengers, on the three hour tour, were killed when the shipwreck occurred.

Sydney - An intoxicated skipper accused of the manslaughter of six boat passengers handed over the vessel's steering to an unlicensed passenger affected by drugs and alcohol, a Sydney jury has been told.

In his opening address today, Crown prosecutor Mark Hobart, SC, said the skipper also failed to supervise the passenger and failed to keep a proper lookout.

Matthew Norman Reynolds, 32, of Tweed Heads, in northern NSW, has pleaded not guilty in the NSW Supreme Court to six counts of manslaughter.

Mr Hobart told the jury the Crown contended that Mr Small was behind the wheel of the boat when it collided with a fishing trawler in Sydney Harbour about 2.30am on May 1, 2008.

The prosecutor said all of the passengers on the boat were affected to some extent by alcohol and or drugs, having earlier been at a party at Balmain.

Before the collision, Mr Hobart alleged, Mr Reynolds had handed over the steering to Mr Small.

"The Crown says Mr Small was so intoxicated that it would have been obvious to Mr Reynolds, except for one thing: Mr Reynolds himself was intoxicated," Mr Hobart said.

The trial is continuing before Justice Michael Grove.
Posted by Sam at 7:13 AM