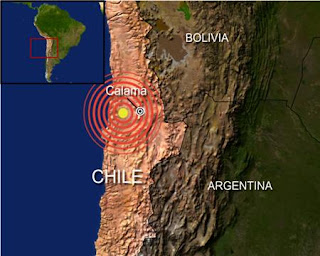 According to a USGS geophysicist the magnitude 8.8 earthquake that just hit Chile is 500 times greater in strength than the 7.0 earthquake which devastated Haiti a month ago.

Huge quake hits Chile; tsunami threatens Pacific
By EVA VERGARA
Associated Press Writer
SANTIAGO, Chile (AP) -- A devastating magnitude-8.8 earthquake struck Chile early Saturday, shattering buildings and bridges, killing at least 78 people and setting off a tsunami that threatened every nation around the Pacific Ocean - roughly a quarter of the globe.
Chilean TV showed devastating images of the most powerful quake to hit the country in a half-century: In the second city of Concepcion trucks plunged into the fractured earth, homes fell, bridges collapsed and buildings were engulfed in flames. Injured people lay in the streets or on stretchers.
Many roads were destroyed and electricity and water were cut to many areas.
There was still no word of death or damage from many outlying areas that were cut off by the quake that struck at 3:34 a.m. (1:34 a.m. EST, 0634 GMT) 200 miles (325 kilometers) southwest of Santiago.
Experts warned that a tsunami could strike anywhere in the Pacific, and Hawaii could face its largest waves since 1964 starting at 11:19 a.m. (4:19 p.m. EST, 2119 GMT), according to Charles McCreery, director of the Pacific Tsunami Warning Center.
The rest of the story:
Posted by Sam at 8:28 AM