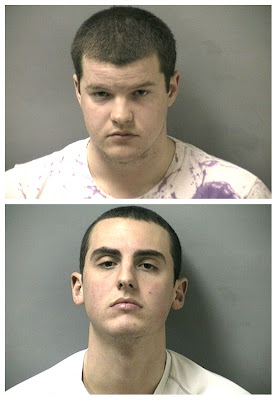 Is a felony too much?

What if a snowball hit a driver who had his window open and it blinded him causing an accident?

What if someone were killed in the accident?

Felony snowball throwing charges have been leveled against two Virginia college students for allegedly pelting a city plow and an undercover police car during Saturday's blizzard.

Charles Gill and Ryan Knight, both 21, were nabbed by cops in Harrisonburg, where they attend James Madison University.

According to police, the pair first targeted a city plow last Saturday afternoon. The driver responded by calling cops to report the frosty fusillade. When police responded to the scene in a bid to identify the assailants, their unmarked vehicle also came under an icy assault, according to a Harrisonburg Police Department press release.

Gill and Knight, a guard on JMU's basketball team, were then apprehended and booked into jail for throwing missiles at occupied vehicles, a felony. Gill (top) and Knight are pictured above in Rockingham County Sheriff's Office mug shots. If convicted of the felonious snowball tossing, the men each face between one and five years in prison, and a maximum $2,500 fine.
Posted by Sam at 6:46 AM