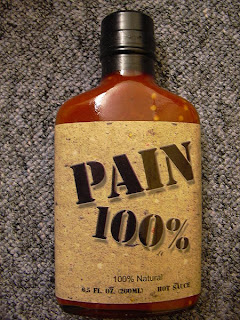 It could have been worse I guess, at least it wasn't this hot sauce.


Ala. man attacked with Worcestershire sauce bottle
FLORENCE, Ala. (AP) - Police said a 38-year-old man was charged with beating another man at a motel with a sauce bottle and a fire extinguisher. Police said the suspect was being held at the Lauderdale County Jail on $6,000 bond on charges he attacked a 43-year-old man who was returning to his motel room.

Officials at Eliza Coffee Memorial Hospital said the victim was treated in the emergency room and admitted to the hospital, where he was listed in good condition.
Posted by Sam at 8:05 AM