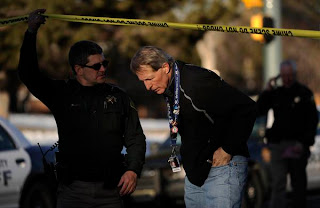 I feel badly for the folks who live in Littleton, Colorado.

This math teacher is a hero.  If he hadn't acted who knows how many more students would have been wounded or even killed.

Here is the link to the new Facebook fan page:  Dr. Benke is a hero


Teacher tackles gunman suspected in school shooting
By P. SOLOMON BANDA
Associated Press Writer
LITTLETON, Colo. (AP) -- Math teacher David Benke says he had no time to fear for his life when he tackled a man he said was preparing to reload a rifle to shoot students at a Colorado middle school who were heading home for the day.
And Benke doesn't consider himself a hero for stopping the 32-year-old accused of wounding two students Tuesday at the Littleton school that's just miles from Columbine High School, the site of one of the nation's deadliest school shootings.
"You know, it bugs me that he got another round off," Benke said of the two shots that authorities say Bruco Strongeagle Eastwood fired.
The rest of the story:
Posted by Sam at 7:04 AM