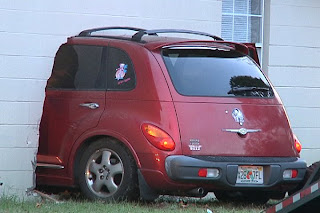 No comment other than this sure adds insult to injury.

Home robbed after after vehicle crash
By Bryan Shettig - The Herald-Zeitung
Randi Mohn was sitting on her couch Tuesday night when she was startled by an SUV crashing through her bedroom wall and stopping in her living room.

Much of her belongings were ruined and some were even stolen by thieves overnight while she stayed at a friend’s house.

“I was sitting on the couch when the truck hit the couch, because it went all the way through the bedroom,” she said of the 1996 Chevrolet Tahoe belonging to her neighbor in the 100 block of Morales Court.

Mohn had only lived in the duplex for about one month but is now moving elsewhere in the city after police say a neighbor let his 7-year-old son sit on his lap and drive the SUV. Officials say the SUV scraped another parked vehicle and continued onto Mohn’s lawn and through her bedroom wall.

The crash destroyed her bedroom, including the closet, which was parallel to the adjoining living room wall, and between Tuesday night and Wednesday morning burglars took “all the clothes that fit” she said.

After the crash, the 32-year-old man, whom police say was the driver, fled the scene on foot, leaving his son behind in the truck. The boy was not hurt in the wreck and because the man has not been charged yet, police would not reveal his name, said Lt. Michael Penshorn, New Braunfels Police Department spokesman.

Police are investigating the wreck along with Child Protective Services and both have spoken to numerous neighbors in the Villa Serena Community. If arrested, he could face multiple charges, including leaving the scene of a crime, but police have not concluded their investigation nor have they decided on the full range of charges.

It is unclear yet whether or not the man was intoxicated or on drugs during the incident, Penshorn said.

Originally New Braunfels Fire Department battalion chief Rick Edwards said the man’s wife was in the vehicle when it crashed, but Penshorn said later that it was just the father and son in the vehicle.
Posted by Sam at 6:54 AM