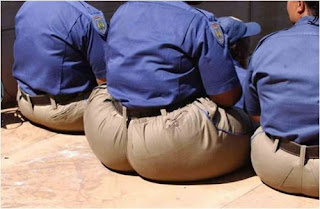 Its too late for me save the children!


(CNSNews.com) – At a ceremony at the White House on Tuesday, First Lady Michelle Obama announced the launch of the ‘Let’s Move’ campaign to end childhood obesity in the United States, an epidemic she said is costly and a threat to national security.

“A recent study put the health care cost of obesity-related diseases at $147 billion a year,” Mrs. Obama said. “This epidemic also impacts the nation’s security, as obesity is now one of the most common disqualifiers for military service.”

The ceremony, attended by many officials of President Barack Obama’s cabinet, followed the signing earlier in the day of a presidential memorandum establishing a task force to study the problem and make recommendations after 90 days.

Obama announced a long list of goals she said she hopes the “Let’s Move” campaign will accomplish, including many that can be done “in a generation.”

“This isn’t like a disease where we’re still waiting for a cure to be discovered – we know the cure for this,” Obama said. “This isn’t like putting a man on the moon or inventing the Internet. It doesn’t take some stroke of genius or feat of technology.

“We have everything we need, right now, to help our kids lead healthy lives,” Obama said.

Some of the goals include ending what Obama referred to as “food deserts” with a $400 million a year “Healthy Food Financing Initiative,” which will bring grocery stores to low-income neighborhoods and “help places like convenience stores carry healthier food options.”

Obama called for overhauling many federal laws and guidelines, including adding $10 billion over the next decade to “update” the Childhood Nutrition Act, which feeds 31 million children at school and would add funding to feed more children.

The federal food pyramid would also get a makeover through the campaign, and there would be new efforts to get manufacturers to add “family friendly front-of-package labeling” that discloses a product’s nutritional value.

The First Lady said a broad coalition of groups interested in children’s health are coming together to form the Partnership for a Healthier America, which will use professional athletes, members of the media, and state and local dignitaries to promote the “Let’s Move” campaign and its goals around the country.

Obama used anecdotal details from her own life to explain the challenges faced by overworked parents and children who spend too much time watching TV or playing video games because their neighborhoods are unsafe for playing outside.

“So many parents desperately want to do the right thing, but they feel like the deck is stacked against them,” Obama said. “They know their kids’ health is their responsibility but they feel like it’s out of their control.”
“They are bombarded by contradictory information at every turn, and they don’t know who to believe,” she said.

Obama said before she lived in the White House she struggled to balance the demands of working and being a mother, and occasionally fed her two daughters fast food or “less healthy microwavable options.”

“And one day,” she said, “my pediatrician pulled me aside and told me, ‘You might want to think about doing things a little bit differently.’”

“Our kids did not do this to themselves,” Obama said. “Our kids don’t decide what’s served to them at school or whether there’s time for gym classes or recess. Our kids don’t choose to make food products with tons of sugar and sodium in super-sized portions, and then to have those products marketed to them everywhere they turn.”

“And no matter how much they beg for pizza, fries and candy, ultimately, they are not, and should not, be the ones calling the shots at dinnertime,” she said.

A new Web site has also been launched in conjunction with the campaign, www.letsmove.gov.