Meanwhile his victims wait for justice 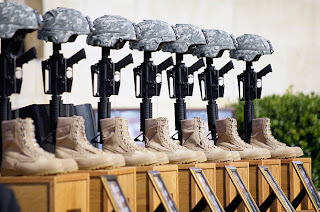 Okay he got his delay until June.

Then start up the proceedings.

By Valentino Lucio - Express-News
The Article 32 hearing, the military's version of a civilian grand jury proceeding, for Army Maj. Nidal Malik Hasan has been delayed until June 1, officials said.

Col. James Pohl, the investigative officer assigned to the case, granted a request from the defense to delay the start of the hearing, which was originally set for March 1. Pohl served on a Guantanamo military commission and oversaw the case of U.S. troops charged in the Abu Ghraib prison scandal.

Hasan's lawyer, John Galligan, doesn't believe his client, who remains hospitalized at Brooke Army Medical Center, is in any condition to sit through prolonged testimony.