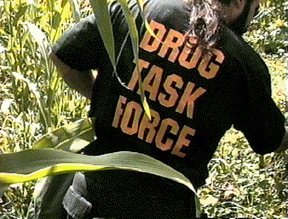 SEGUIN — Police and sheriff’s investigators with the Guadalupe County Joint Narcotics Task Force and 25th Judicial District Attorney’s Office made 15 arrests this past week and are seeking another suspect on sealed narcotics trafficking indictments in the wake of a 10-month undercover investigation.

The indictments were issued Jan. 21 at the conclusion of a day-long special session of the Guadalupe County grand jury conducted by Hollub and the county’s new drug interdiction prosecutor, Dave Willborn.

Several of the defendants stand indicted on organized crime or drug trafficking charges that could send them to prison for the rest of their lives.

Hollub, who declared war on the Crips criminal street gang in Seguin soon after taking office, said the undercover investigation began when Flores, a former Drug Enforcement Administration undercover officer, approached her with intelligence his narcotics unit had uncovered about the illegal drug trade in Seguin.

Flores said gangs, including the Crips, the Mexican Mafia and the Texas Syndicate are all heavily involved in the narcotics trade in Seguin, and that drug activity leads to many other crimes — some of them violent ones.

“Lt. Flores had information about drug-related activity and about some individuals he wanted to target,” Hollub said.

Investigators worked for months to build cases, Flores said. While many of the players arrested over the past week knew of one another, not all were connected with one another, he said.

“These arrests came from several locuses of activity,” Flores said. Seized in the investigation and subsequent arrests were tens of thousands of dollars’ worth of crack cocaine and methamphetamine as well as other drugs, and an unspecified amount of cash.

Also taken were drug paraphernalia and other accoutrements of the illegal drug trade, including documents Flores described as “ledgers” that listed the names of customers and amounts of money owed to their drug connections that will provide fodder for future investigations — and future charges.

Hollub also wants to deprive criminal defendants of the benefit of their ill-gotten gains, if convicted, through state and federal forfeiture laws — long a favorite tactic of Zwicke and his investigators, who like to refer to forfeiture as a “tax” on drug dealers that in Guadalupe County has been used to provide special equipment to law enforcement and to help fund a drug court presided over by County Court-at-Law Judge Linda Z. Jones.

Toward that end, Willborn intends to initiate forfeiture proceedings against a Seguin home long known to have been used in drug-related activity, he said.

“Investigation has revealed at least 10 years of activity in that house,” Willborn said. Federal law allows law enforcement officials to seize a home owned by a drug trafficker or one that is rented to a drug trafficker, and investigators have sent certified letters to landlords in Seguin to make them aware of such activity.

“These people need to be put on notice,” Hollub said. “We’re going to go after their toys, their cars and their houses and if a landlord is knowingly renting to a dope dealer, we’re going after him.”

The bottom line, the district attorney said, is the blatant activities alleged of these and other defendants will not be tolerated on her watch — or while Zwicke and Kelso work with her office to fight it.

“I can tell you from the standpoint of this office, none of these defendants will be offered probation,” Hollub said. “We want to get these offenders out of our community, and this was a combined effort by my office, the police department and the sheriff’s office to do just that.”

Flores acknowledged the recent arrests didn’t shut down the local drug trade, but their effect has been felt on the street, he said.

“I’m well-pleased with the dedication of all of these people over the last 10 months,” Zwicke said. “These are some major players, and they need to go.”
Posted by Sam at 3:54 AM