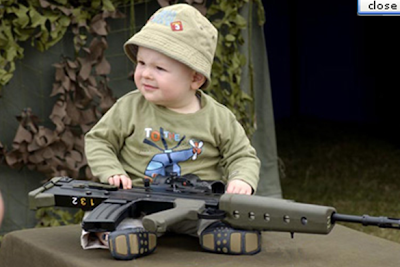 Tiny footprints at the crime scene?

Was he the lookout?

A Richmond couple is facing charges in connection to a string of burglaries that the couple allegedly committed with their toddler in tow.

The Tillsons are being held at the Two Bridges Regional Jail in Wiscasset on $50,000 cash bail each.

The burglaries occurred during the past couple of weeks in Richmond and Alna, Murphy said. The items stolen include numerous handguns and rifles.

Police have recovered all of the stolen items, Murphy said.
The 11 stolen firearms were found in Augusta and Winthrop, said Murphy, who believes the weapons are worth several thousand dollars.

"All the ones we know are missing have been recovered," Murphy said.

The investigation is ongoing. Police believe there may have been additional victims not yet identified, Murphy said.

Charges could still be brought against the Tillsons or others involved in the illegal sale and possession of the firearms, Murphy said.

Police believe the Tillsons took their 3-year-old child with them inside the homes and buildings they were burglarizing, Murphy said.

"We knew about that because my officers found little footprints," he said.

The Tillsons, when interviewed by police, acknowledged taking the child, Murphy said.

The Department of Health and Human Services' Child Protective Services is investigating, Murphy said. In the meantime the toddler has been temporarily placed with friends of the family.

The Sheriff's Department asks anyone with information concerning the investigation to contact Detective Sgt. Kenneth Hatch at (207) 882-7332.
Posted by Sam at 7:19 AM