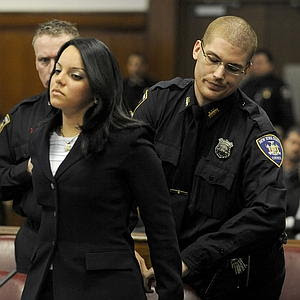 This is the thing most men fear and what, I think, hurts many sexual assault cases and allegations.

The fear that the story is made up does a huge disservice to those who are the actual victims of rape and sexual abuse.

I do feel badly for her children.

A young mother who falsely cried rape, sending an innocent man to prison for nearly four years, will experience firsthand what he suffered -- she'll spend one to three years behind bars for perjury.
"I wish her the best of luck," said William McCaffrey last night of Biurny Peguero Gonzalez.
"Jail isn't easy."

McCaffrey, 33, of The Bronx, was locked up after Gonzalez accused him of raping her at knifepoint on a Bronx street back in 2005.
It was a lie she repeated to doctors, cops, prosecutors, a grand jury and the jury that convicted McCaffrey.

"What happened in this case is one of the worst things that can possibly happen in our criminal-justice system," Manhattan Supreme Court Justice Charles Solomon said as he pronounced sentence.
McCaffrey said he has some sympathy for Gonzalez and hopes she "doesn't go through what I went though.
"I was an accused rapist in prison," he said, adding that in prison, "rape is the worst crime possible."
All is clearly not forgiven.

A person who would "lie and paint somebody as a rapist is worse than a real rapist or a real murderer," McCaffrey said

He also blamed "the arresting officers, the prosecution." Everyone, he said, "wanted to believe the lie, the ADA [assistant district attorney] first and foremost."

Judge Solomon said, "It's hard to imagine why anyone could have done this."

It turned out Gonzalez robbed McCaffrey of four years of his life for the most trivial of reasons.
She'd been hanging out with a group of girlfriends when she accepted an invitation to get into his car.
After she returned, her pals were furious that she'd ditched them -- so she made up the rape story to gain their sympathy.

She will be eligible for parole in a year -- after serving a one-quarter of the time her victim was imprisoned.
Gonzalez was taken away after making a tearful apology to McCaffrey, who was not in court.
She also begged for mercy on behalf of her two sons, ages 3 months and 7 years.
"To Mr. McCaffrey, I am aware that nothing I do or say to him can bring back the years he spent in jail," she said. "I want him to know I will carry this guilt for the rest of my life."

Gonzalez, 27, had recanted her story last year after new DNA evidence proved she'd been lying and a priest to whom she'd confessed urged her to come clean.

Gonzalez had repeatedly insisted she was "110 percent" sure McCaffrey had raped her after they met in Inwood, in upper Manhattan, and she drunkenly accepted a ride.

The outraged prosecutor asked that she be sentenced to two to six years "so that there's a chance that she will serve what he served."

Krutoy conceded that Gonzalez -- with a previously clean record -- looked like a good candidate for probation.
But ultimately, she needed to serve time, Krutoy said, "because of the extent of harm that she caused . . . She came into court and she lied."

Her lie -- blurted out as her girlfriends were slapping her around -- took on a life of its own, fueled in part by McCaffrey's long rap sheet of violent arrests.

Gonzalez could have pulled the plug on the prosecution at any time, but instead she watched McCaffrey get sent up the river for a rape he never committed.

Her lawyer, Paul Callan, conceded of the perjury, "It is not defensible."

He insisted that Gonzalez suffered horrible abandonment and sexual abuse as a young teen, and has now had "a spiritual awakening."
"She is not the same person as the one who committed this crime at age 22," Callan said.

The lawyer said that at their first meeting, she'd told him, "I don't care what happens to me. You have to get Mr. McCaffrey out of jail."
Posted by Sam at 7:01 AM