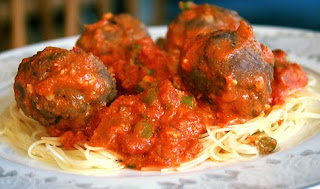 I wonder how much longer the couple will stay together?

A state appeals court has upheld the NYPD's firing of a veteran detective who blamed a failed drug test on his wife spiking his meatballs with pot.

Anthony Chiofalo, a 22-year-veteran, challenged his 2006 termination by Commissioner Raymond Kelly, but the Appellate Division shot it down.

The panel of judges agreed with Kelly that the high levels of marijuana found in Chiofalo's hair samples could not have come from accidentally ingesting the drug in food or from second-hand smoke.

Chiofalo argued that the hair-sample test was not authorized by the NYPD's collective-bargaining agreement with his union.

"The Court of Appeals has held that the Commissioner was empowered to choose the method of drug testing, and that choice was not subject to collective bargaining," the judges wrote in a decision made public Thursday.

Chiofalo's wife, Catherine, smokes marijuana for back pain and admitted to investigators that she laced her husband's meatballs in hopes that he would be fired before getting killed on the job.