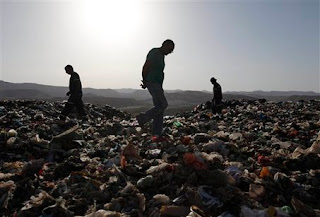 Its now come to this.


I pray that little Gabriel is alive somewhere and will be found.

I dread that his remains are the only thing found.

If that is the case then prosecute his mother for capital murder, nothing less, and seek the death penalty.

By Eva Ruth Moravec - Express-News
Contractors began excavating an East Side landfill Tuesday in search of a missing Arizona baby, Gabriel Johnson, who last was seen in San Antonio the weekend after Christmas.

Police Chief William McManus said he expects it will take at least six days for excavators to remove 1.8 million cubic feet of debris from a section of the Tessman Road Landfill before reaching the depth in which the baby’s remains could be.

McManus said that section is being targeted because it’s tied to a trash bin at a hotel on San Pedro Avenue, where Elizabeth Johnson, 23, claimed to have suffocated her baby, placed him in a diaper bag and disposed of his body.