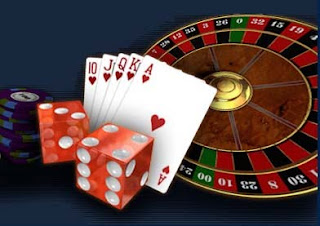 I wonder, of course, what the implication of this study might be to the criminal justice system.

Do criminals have a non-functioning or poorly functioning amygdala thereby leading them to take risks or engage in risky behavior, in essence gambling they will win?

Will this become a new criminal defense?  Some will try I presume.

After all what will they have to lose?

Study shows why it is so scary to lose money
WASHINGTON (Reuters) - People are afraid to lose money and an unusual study released on Monday explains why -- the brain's fear center controls the response to a gamble.

The study of two women with brain lesions that made them unafraid to lose on a gamble showed the amygdala, the brain's fear center, activates at the very thought of losing money.

The finding, reported in the Proceedings of the National Academy of Sciences, offers insight into economic behavior and suggests that humans evolved to be cautious about the prospects of losing food or other valued possessions.

Benedetto De Martinoa of the California Institute of Technology in Pasadena and University College of London and colleagues were studying why people will turn down gambles that are likely to lead to gain.
"Laboratory and field evidence suggests that people often avoid risks with losses even when they might earn a substantially larger gain, a behavioral preference termed 'loss aversion'," they wrote.

"For instance, people will avoid gambles in which they are equally likely to either lose $10 or win $15, even though the expected value of the gamble is positive ($2.50)."

They studied two women with a rare genetic condition called Urbach-Wiethe disease, which damages the amygdala, the almond-shaped center in the brain that controls fear and certain other acute emotions.

The researchers compared the women's responses to 12 people with undamaged brains. They noted this kind of study usually involves only a few people as it is not possible or ethical to deliberately damage a person's brain to see what happens.

The two patients with damaged amygdalas fearlessly risked a $50 pot.

"We think this shows that the amygdala is critical for triggering a sense of caution toward making gambles in which you might lose," Colin Camerera of University College London, who worked in the study, said in a statement.

The study could also help researchers understand why some people are more willing to take risks than others. Perhaps genetic differences in the DNA activated in the amygdala explain it, the researchers said.
Posted by Sam at 7:12 AM