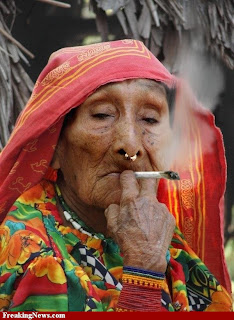 What are we going to do with these folks?

Lock them up in a geriatric jail?

Marijuana use by seniors go up as boomers age
By MATT SEDENSKY, Associated Press Writer

MIAMI – In her 88 years, Florence Siegel has learned how to relax: A glass of red wine. A crisp copy of The New York Times, if she can wrest it from her husband. Some classical music, preferably Bach. And every night like clockwork, she lifts a pipe to her lips and smokes marijuana.

Long a fixture among young people, use of the country's most popular illicit drug is now growing among the AARP set, as the massive generation of baby boomers who came of age in the 1960s and '70s grows older.

The number of people aged 50 and older reporting marijuana use in the prior year went up from 1.9 percent to 2.9 percent from 2002 to 2008, according to surveys from the Substance Abuse and Mental Health Services Administration.

The rise was most dramatic among 55- to 59-year-olds, whose reported marijuana use more than tripled from 1.6 percent in 2002 to 5.1 percent.