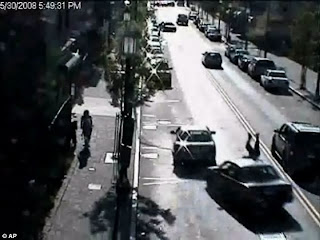 I have no idea what a jury would do with this case.  He'll most likely, in my opinion, be found guilty, but unless he has any underlying criminal history or comes across as a jerk, he'll likely get probation.


Manslaughter trial date set for area man
By Bryan Shettig - The Herald-Zeitung
A June 7 trial has been set for a New Braunfels man accused of hitting a San Antonio man with his truck in January 2009.

Philip Craig Smith, 47, is accused of hitting Michael Sanchez, a doctor and director of University Hospital’s emergency department, who was running on the side of the road as part of a charity run toward O.P. Schnabel Park, where his wife was waiting for him, according to police reports. Sanchez died from his injuries at the scene. He was 52 years old.

According to Bexar County district clerk’s office documents, Craig turned himself in on Feb. 3. He was indicted on manslaughter charges that same day by a San Antonio Grand Jury and released the same day on a $20,000 bond.

His trial will be held in Bexar County 227th District Court.

If convicted on manslaughter charges, Smith could face between two and 20 years in prison and up to a $10,000 fine. If Smith has no prior felony convictions, Herberg said, he could be eligible for probation.

Smith said he was driving to have his brakes fixed when his cell phone rang, according to a police report. Smith said he answered the phone and when he saw Sanchez he hit the brakes, which locked up, and his vehicle hit the runner.

But a seven-month investigation by the Bexar County District Attorney’s office and a seven-month inquiry by police showed Smith was possibly under the influence of prescription medication at the time, Herberg said.

The DA’s office is also alleging Smith’s vehicle “was not roadworthy,” he said. Witnesses noted in a police report they saw Smith driving in the left lane and then suddenly swerve to the right lane toward Sanchez, who was jogging on the road.
Posted by Sam at 6:42 AM