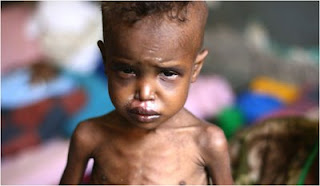 How does someone do this to their own child?

Its inexplicable to me, and yes i know this happens and folks have psychological issues but still?

By Valentino Lucio - Express-News
A couple remained in custody Saturday night after police say they admitted refusing to adequately feed the woman's 4-year-old daughter, giving her only cereal once a day.

Robin Palafos, 24, and Luis Valenzuela, 27, were booked into Bexar County Jail on one count each of injury to a child — serious bodily injury, officials said. Bonds were set at $150,000.

Authorities became aware of the situation Friday as the girl was being treated for “severe starvation” at Christus Santa Rosa Children's Hospital, according to an arrest warrant affidavit.