A river runs trhough it 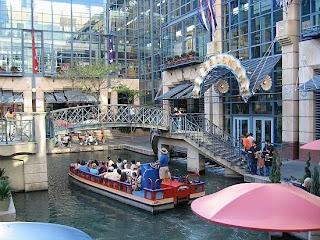 This is all very confusing in some ways.  If the contention is that Keystone lost $65 Million for the land because Marriott interfered with their sale then why did the jury award $34.3 Million?

That seems to equate to the jury finding that the valuation of the land proffered by Marriott was correct, i.e. $30 Million vs. Keystone's contention that it was worth $65 Million.

So Marriott did interfere, but the value was what Marriott claimed not what Keystone claimed.

Then there is the issue of the award of $39 Million for the slander/libel finding against Marriott.

On to the Fourth Court of Appeals when the case is finished at the District Court level, unless a settlement is reached between the parties.

By Patrick Danner - Express-News
A Host Marriott Corp. partnership interfered with a 2005 sale of the land under the Marriott hotel connected to the Rivercenter mall and must pay more than $30 million in damages to the mall's former owner, a Bexar County jury ruled Monday.

Jurors still must decide whether to award Keystone-Texas Property Holding Corp. punitive damages after finding the Host Marriott partnership acted with “malice,” or with intent to cause “substantial injury or harm” to Keystone.

Tom Cunningham, a lawyer for Host Marriott, expressed disappointment with the verdict.