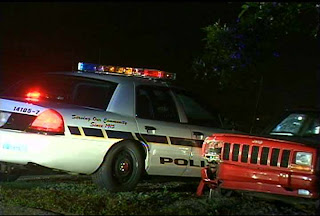 Just curious.  Did the Deputy ever know the truck was stolen before the guy bailed?

Not that it has anything to do with it.

I am presuming that the officer had put his overhead lights on to stop the vehicle when he sped up and broke the traffic law.

Stolen pickup recovered after chase
SEGUIN — Sheriff’s deputies recovered a pickup stolen in the Hutto area after a high-speed chase early Thursday — but the driver escaped.

Guadalupe County Sheriff Arnold Zwicke said a deputy was driving onto westbound Interstate 10 at Guadalupe Street at about 4:15 a.m. when he noticed a pair of pickups — a Dodge and a Ford F-250, following one another closely, westbound on Interstate 10.

“The officer knew from his training and experience that those type vehicles moving in the middle of the night are often stolen and used for human trafficking,” Zwicke said.

The officer pulled onto the interstate behind the trucks, and when they split at the bottom of the State Highway 46 exit, he followed the F-250 as it turned right on FM 78 and then right again to go eastbound to New Braunfels.

As the driver turned onto Huber Road, he accelerated even though the following deputy hadn’t attempted to stop him, and turned left on Rudeloff Road and then back north onto Huber, reaching speeds of 90 mph. At Cordova Road, Zwicke said the deputy reached speeds of 100 mph — and the pickup was still pulling away. It crossed State Highway 123 and then turned left into a pasture off Laubach Road, where the vehicle rammed a ranch gate.

The driver bailed out and ran off across the field on foot and then into the brush.

No one was hurt, but the truck and the gate were damaged, Zwicke said. Investigation continues.
Posted by Sam at 9:20 AM