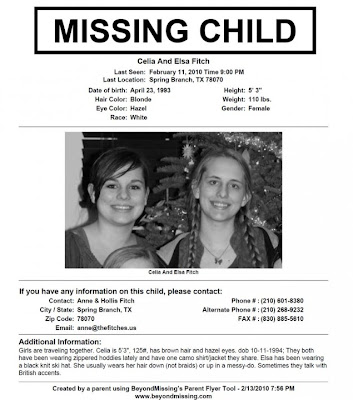 What a heartache for their parents.

I hope they are okay and  re-united with their family soon.

Please click on the poster to read the information.

Sisters missing from home since Feb. 11
By Bryan Shettig  - The Herald-Zeitung

SPRING BRANCH — Elsa and Celia Fitch, Spring Branch residents and sisters, disappeared sometime after the family went to bed Feb. 11 and parents believe they are with a California woman they met online.

The girls, ages 16 and 15, are Smithson Valley High School students. The Comal County Sheriff’s Office currently lists them as runaways, because they apparently met a woman through an online role-playing Web site and decided to visit her in San Diego, according to a classmate who asked that she not be identified.

When the parents went to wake their children for school Friday morning, the two girls were not in their beds, according to a Facebook.com page called “MISSING GIRLS: Elsa and Celia Fitch” created by the girls’ parents, Anne and Hollis Fitch. The parents did not return calls for comment.

The girls told children at school they were going to Florida and California, the classmate said.

According to a flier the parents are distributing, they believe the unknown woman, who goes by “Tristan” online, provided transportation for the girls along with cell phones.

Investigators from the sheriff’s office are working with telephone providers to track the girls, said Lt. Mark Reynolds, a CCSO spokesman.

“Wherever they’re going to be, we want to be there before they arrive,” Reynolds said.

According to the flier, the sisters are both 5 feet 3 inches tall. Celia has brown hair and Elsa has blonde hair; both have hazel-colored eyes. The girls could be wearing zip-up hooded sweatshirts and a camouflage shirt. They sometimes speak in British accents, according to the flier.
Posted by Sam at 6:41 AM