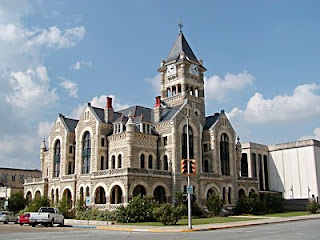 He allegedly shot her in the head with an arrow then tried to burn her body and presumably the house after she died.

The jurors have a dilly of a case in front of them.  I predict they will find him guilty.

The family apparently does not wish to see the death penalty invoked or assessed.  Will this weigh heavilly in the Jury's sentencing decision?

VICTORIA — Shortly after a firefighter discovered San Antonio restaurateur Viola Barrios' badly burned body in her smoke-filled bedroom, another fireman recalled seeing something unusual: a teenager perched on top of a neighboring house, intently watching them.

The next time Nicholas Weber saw the teen, Joe Estrada Jr., it was on television after Estrada was arrested, the firefighter said Monday as testimony began in Estrada's capital murder trial.

The firefighter was one of several emergency personnel whom prosecutors asked to recount how Barrios, the founder of Los Barrios Mexican Restaurant, was found April 24, 2008. Barrios, 76, died after being shot in her temple with an arrow.