One score he doesn't need 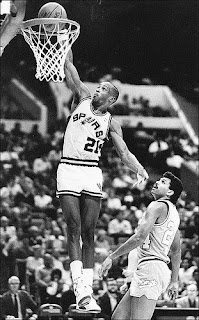 I hope for his sake that the charges prove not to be true.

By Guillermo Contreras - Express-News
A lawyer for former Spurs guard Alvin Robertson said Saturday his client has been wrongly linked to a sex-trafficking ring in Bexar County because of his prominence on and off the basketball court.

“He's adamant that he's done nothing wrong,” said attorney Jimmy Parks Jr., who spoke with Robertson during his arrest Friday. “He's willing to get back to Bexar County as quick as he can to try to clear himself of these charges.”

Robertson was arrested in Bentonville, Ark., where he was to attend a basketball shooting clinic over the weekend.