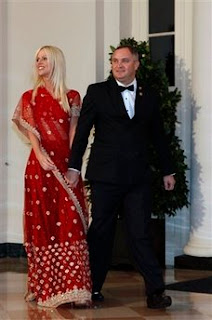 Charge these two with criminal trespass and anything else you can figure out and confiscate any monies they recieve as a result of this BS.

This make two different reality show wannabees in the last month or so to do outrageous crap, (See the balloon boy episode)

NEW YORK (AP) - The couple who crashed President Barack Obama's first state dinner are peddling their story to broadcast networks for hundreds of thousands of dollars, a television executive says.

The executive, who spoke on condition of anonymity because the network does not publicly discuss bookings, told The Associated Press that representatives for Michaele and Tareq Salahi contacted networks to urge them to "get their bids in" for an interview. The executive said the Virginia couple was looking for a payment in the mid-six figures range.

Meanwhile, CNN confirmed that the Salahis had canceled an appearance they had scheduled for "Larry King Live" on Monday.