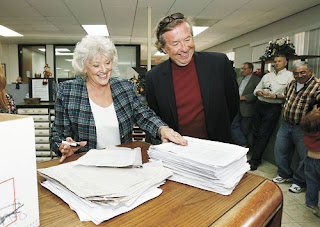 Mr. Peterson, I disagreed with you that this needed to be put to a vote and incur further delay and costs.

I do applaud your efforts however and now that it will be put to a vote I believe the good citizens of Comal County will understand the whys and wherefores of the new Justice Center.


Petitioners turn in 6,500 signatures Monday
By Chris Cobb - The Herald-Zeitung

After a 30-day petition drive collected more than 3,000 signatures above the necessary threshold to force an election, the downtown justice center’s fate is closer than ever to being decided at the ballot box.

The petition was turned in Monday to the Comal County Clerk’s Office.

Petition organizer Glen Peterson said democracy was “alive and well,” after he submitted 6,500 signatures from county residents asking to vote on the construction of a proposed $36 million facility in downtown New Braunfels.

County Commissioners voted in October to forgo a bond election and issue debt to pay for the justice center’s construction.

“This was a grass-roots movement to stop what our elected official were trying to do, which was take away our right to vote,” said Peterson, an attorney who’s running for Comal County Judge in 2010. “Our Commissioners thought we had abdicated our right to vote, and we have told them otherwise.”

County Clerk Joy Streater will verify the signatures with the aid of Voter Registrar and Tax Assessor-Collector Cathy Talcott. If more than 3,300 of the 6,500 signatures submitted Monday are verified as registered county voters, the justice center bond election will be held in May 2010.

Streater estimated it would take two weeks to verify the signatures.

Commissioners were scheduled to issue certificates of obligation to build the 127,000 square-foot facility on Thursday, but Streater said the court couldn’t vote to issue debt while the petition is being verified.

The end of the petition drive also puts an end to weeks of political jockeying — with organizers gathering signatures while county officials were holding town hall meetings to discuss why the facility needed to be built now to take advantage of construction savings and low interest rates.

“If they’ve gathered enough verified signatures, then the voters have spoken and we need to listen,” said County Commissioner Greg Parker, who voted to issue debt in October to build the justice center. “I still believe in the project. This just means that we, as county commissioners, need to do a better job of showing the public all of the reasons we need this facility.”

The $36 million debt issuance would be the largest in the county’s history.

Voters like Kemal Martinez, who came out Monday to see the petition submitted to the clerk’s office, would like to be able to decide whether it’s a wise investment.

“I wouldn’t want them to spend that much money without my vote,” he said.
Posted by Sam at 6:26 AM