Hero Cart (actually it was a bagel cart) 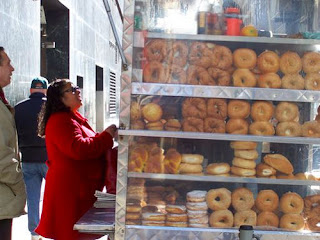 People are seen lining up at the cart to thank it!!

Orlando police reports show two suspects in hooded sweatshirts, masks and armed with a shotgun walked into the eatery at 2817 Edgewater Drive around 5:37 a.m.

Sgt. Barbara Jones of the Orlando Police Department said the men tried to rob the restaurant, but one of the employees pushed a bagel cart at the suspects and they fled.

Jones said one customer was inside the restaurant at the time of the attempted robbery. There were no injuries.
Posted by Sam at 7:05 AM