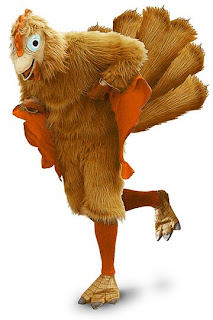 Their highest hopes were that 200 people might come — bringing their children to the participate in the “turkey chase.”

They never imagined the turnout they received on Thursday morning in Gruene for the first annual Gruene Turkey Trot. The 5k walk and run drew close to 700 participants, many of whom came from out of town.

“Our goal was 250 people and we got 700 plus to enjoy this beautiful day,” said Detective Sergeant Tommy Ward of the Comal County Sheriff’s Office, one of the organizers of the event.

“Couldn’t ask for a more beautiful day,” he said.

Families ran together, some with jogging strollers, some as an informal team.

Lee, Traci and Kyle Kendrick joined the race as a family.

“We run occasionally. Our son (Kyle) is on the track team at Church Hill Middle School,” Traci Kendrick said.

“And we heard there would be adult beverages,” Lee Kendrick added.

After the run, bottles of water, milk and other drinks were available, or if you preferred, beer was provided in the patio area behind the Gristmill, a welcome choice for some at 9 a.m. — it is Thanksgiving, after all — along with bratwurst for those who worked up too much of an appetite to wait for turkey later in the day.

“We thought it would be a fun family thing to do today, before the family thing later in the day,” Traci Kendrick said.

The top four adult runners were given turkeys and medals for their accomplishment. John Martinez edged out Steve Dogisch to win for the men, and Stevi Armstrong took the lead over Vicki Ralph to win for the women.

Some people who came were in search for a holiday event, and found the Turkey Trot appealing.

“If you’re a runner, you look for a run on any holiday,” Vicki Ralph said.

“Blue Santa” made an appearance, shaking hands, thanking participants for their contributions to this charitable event, and inevitably ended up sitting on a bench in front of Gruene Hall with a line of children waiting to have a word with him about the next holiday around the corner. Though he was in blue, not red, the children waiting for the turkey chase didn’t miss an opportunity to provide Santa with a wish list.

After the adult race, children participated in a “turkey chase.”

John Bell, a jail administrator for the Sheriff’s Office, dressed up in a turkey suit for the children to chase him. The chase lasted about two minutes, with dozens of children chasing him around the block, from in front of Gruene Hall, down New Braunfels Street and turning back on Hunter Road toward the finish line.

“Tommy Ward asked me to dress up, and I said I would. Anything to help out kids,” Bell said.

The turnout indicates, at least in the minds behind a new nonprofit named Comal Cops for Kids, which organized the activities, that this event was successful enough to become an annual occurrence for years to come.

“We thought it would be a success if each board member got 20 people to come,” said Jennifer Tharp with Comal Cops for Kids.

“One hundred would be a success,” she said. “But last night, we ran out of the 500 T-shirts, and today about 200 people pre-registered this morning.