A little old for school? 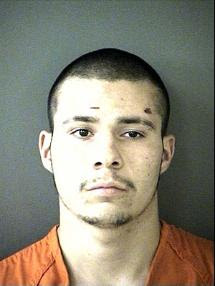 Why was he enrolled in the District at age 19 as a freshman?

Shouldn't he have just gone into the GED program at that time?

He'll get his education and 'diploma' from prison I guess.

A 19-year-old suspected of fondling two teenage girls behind a middle school last month also is accused of assaulting a police officer, a school administrator and another student during a fight — all within five weeks of enrolling in Somerset Independent School District, according to authorities.

Ray Anthony Guerra was in Bexar County Jail on Monday on $70,000 bail. He was charged with resisting arrest, assaulting a public servant, assault with bodily injury, and two counts of indecency with a child by contact.

Guerra, a freshman, transferred to the district more than a month ago when he moved into a foster home next to the district's football stadium, district spokesman Maury Vasquez said. District police arrested him last week after a fight at the high school, Vasquez said.