Its a gratuity people 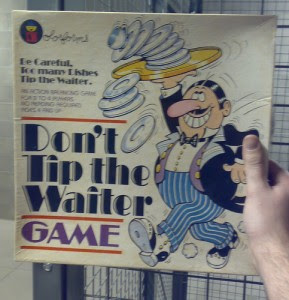 Wow, the police don't have anything better to do?

I mean this seems to be pretty stupid.

The worst that should have happened, IMHO, is they should have received a tcket/summons to appear in Court. Not arrested and hauled down to the pokey.

My guess is the Lehigh Pub will be losing customers over this for sure.

Patrons claim service was so bad, they had to get napkins and silverware for themselves
By DAVID CHANG

If you’re frustrated by poor service at a restaurant, think twice before you decide to not tip. You may be in for a bit more than just a dirty look from the waiter.

"Nobody, nobody wants to be forced to pay a tip or be arrested for terrible service," Leslie Pope said when her happy hour ended in handcuffs.

Pope and John Wagner were hauled away by police and charged with theft for not paying the mandatory 18 percent gratuity totaling $16 after eating at the Lehigh Pub in Bethlehem, Pa. with six friends.

Pope claimed that they had to wait nearly an hour for their order and that she had to get napkins and silverware for the table herself.

“At this point I became very annoyed because I had already gone up to the bar myself to have my soda refilled because the waitress never came back,” Pope said.

After the $73 bill came, the group paid for food, drinks, and tax but refused to pay the tip. After explaining the bad service to the bartender in charge, Pope claimed he took their money and called police. The couple was handcuffed and placed in the back of a police car.

“I understand that, you know, we didn’t pay the gratuity, but it was a gratuity, it wasn’t something that was required,” said Wagner.

The owner admitted that the group waited unusually long for their food, but said the pub was extremely busy that night. He said managers offered to comp the food, a claim the couple denies ever happened.

“Obviously we would have liked for the patron and the establishment to have worked this out without getting the police involved,” said Deputy Police Commissioner Stuart Bedics.

Police charged them with theft since the gratuity was part of the actual bill. However, it is doubtful that the charges will hold up in front of a judge. The couple is scheduled to appear in court next month.