The ugly king gets ugly 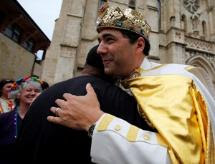 This was just plain silly and unnecessary.

Why didn't he move out of the fast lane or why didn't she just go around him?

A prominent member of Fiesta's 2009 royalty was arrested and charged with impersonating a police officer last week after becoming embroiled in what appears to be a road rage incident.

Charlie Garza, who was crowned last year as the 61st Rey Feo, was arrested Friday after he allegedly tried to use an honorary deputy constable badge to pull over a woman in the 7500 block of North Loop 1604 East in Live Oak.

“Mr. Garza displayed an honorary Bexar County deputy constable certificate, which holds no authority,” said W.R. Tomlin, an assistant chief with Bexar County's Precinct 2 constable's office. “It has been explained to the (honorary) officers who we give certificates to, that they are not issued a badge from this office.”