Too drunk to drive 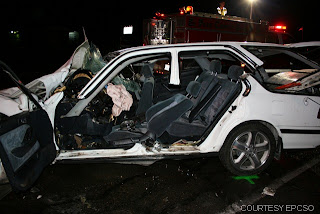 Thank God no one was killed.

A man was charged with intoxication assault after he failed to yield to another vehicle and crashed his van carrying six people, including three children.

Eric Carreon, 28, remained jailed Sunday on a combined $50,000 bail for two counts of intoxication assault, according to county records.

The crash occurred Thursday when Carreon attempted to make a turn from Southeast Military Drive onto Curtis Street, failing to yield to another vehicle that was westbound, according to reports. The second vehicle hit the van. As emergency crews extracted people from the van, a child’s car seat, a cooler and more than a dozen beer cans were spread across the roadway.