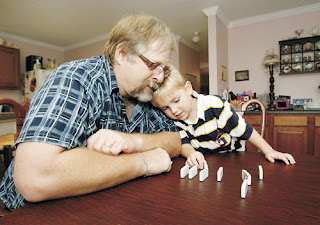 What a truly wonderful and blessed endeavor this is.

LanDon Oatman, 5, rests his head on the shoulder of his dad, Don, while playing dominoes together Friday. (Picture by Laura McKenzie.)


God bless these families and children.

Thirteen children will meet their adoptive “forever families” for the first time at 10 a.m. Tuesday morning for CASA Adoption Day 2009 at the McKenna Children’s Museum.

All at once, these 13 children will be adopted into nine local families.

All of the children come from homes with histories of abuse and neglect.

The local CASA (Court Appointed Special Advocates of Central Texas) program covers Comal, Guadalupe, Hays and Caldwell counties, though some of the children being adopted Tuesday come from Gonzales County. All CASAs are volunteers and assist courts as a guardian ad litem, making each CASA an advocate for the child’s welfare independent of the child’s lawyer and Child Protective Services. This is the first Adoption Day for CASA of Central Texas.

Families of all types adopt children from the four-county region. For Don and Donna Oatman, they already had three grown boys before they adopted a girl, Courtney, and a few years later, her half-brother.

“We had a friend that called one day … then I called Don and asked if he wanted to be a father, ‘I don’t mean in nine months, I mean in 30 minutes!’” said Donna Oatman, who is a CASA volunteer herself.

Donna’s friend’s half-brother had dumped 14-day-old Courtney on her, who is now 12 years old and attends Church Hill Middle School.

“The birth parents would call to take her back, and we had no rights, “ Oatman said.

But Courtney kept ending up back with the Oatmans, and eventually the birth parents legally gave up their rights four months later. The grandparents, however, did not give up as easily.

“The grandparents fought to take her back to her birth mother,” Oatman said.

Because of the challenge mounted by Courtney’s grandparents, the adoption wasn’t official until Courtney was a four-year-old.

Because the adoption was private, it took years for it to be finalized, after the grandparents realized not only that their daughter signed away her rights to Courtney, but also that she was in no condition (in and out of jail, problems with methamphetamine) to take care of their grandchild.

“They didn’t want her, they wanted their daughter to have her. It’s very unusual, typically you don’t have that problem with adoptions,” she said.

But for LanDon, Courtney’s five-year-old half brother, the process was through the state, and went far more smoothly.

“When LanDon was born and we went to get him, the judge said he had to be out of the house he was in and in our house that day. All we had was a car seat,” Oatman said.

LanDon was six weeks old at the time.

There were complications. The children’s biological mother had drug abuse issues, and LanDon was in and out of the hospital the first two years of his life with seizures, surgeries and other issues.

“We didn’t know anything about meth babies, but when people think of meth babies, they don’t visualize (how beautiful they are),” Oatman said.

Those early complications didn’t hamper the development of either child. Courtney is a straight-A student and first chair flutist in middle school band, and LanDon is recently completed fall T-Ball little league and is busy learning to read in preschool.

“No second thoughts. If I could afford it, I’d have a hundred children,” Don Oatman said.

Courtney and LanDon’s older siblings adore them, the Oatmans said.

“My father thinks Courtney can do no wrong,” Donna Oatman added.

“That’s why I love my grandparents,” Courtney said.

“And the heartache is not different,” Don Oatman added.