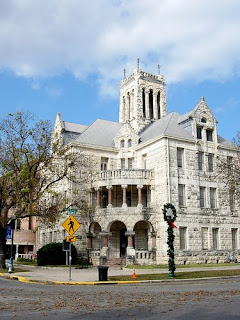 Don't be confused this is to restore the old Courthouse.

Not to build a new one.


County ask for $3.5 M to restore courthouse
By Chris Cobb - The Herald-Zeitung

After narrowly missing out in 2008, Comal County Commissioners are again shooting for state funding to restore the downtown courthouse.

County officials said the courthouse on Main Plaza has some structural issues as well as faulty plumbing and wiring. Commissioners approved a grant application Thursday to submit to the Texas Historical Commission seeking $3.5 million to refurbish the local landmark.

“I can’t tell you how important it is to bring that courthouse back to its original glory,” said Precinct 4 Commissioner Jan Kennady. “It is the crown jewel of Comal County.”

The state denied Comal County funding to restore the courthouse in 2008, instead awarding grants to 14 other counties around the state.

The Texas Historical Commission grades each building’s historical significance on a point system, and last year it gave the Comal County Courthouse a score of 180 — one shy of the 181 needed to secure funding.

“If we don’t get it this time, there’s no hope for Comal County,” Kennady said.

To secure funding this time around, Cherise Bell, the historic preservation officer for the city of New Braunfels, drafted the grant application. Bell said she has experience securing these types of grants, and by offering to do the research and write the application, also saved the county from having to hire a consultant.

She was cautious, though, as the historical commission was only allocated $20 million by the legislature in 2009 to restore courthouses throughout the state.

“The probability is a lot lower this year, but I certainly think we have a courthouse that deserves it,” Bell said.

The $3.5 million would cover more than a third of the total cost to upgrade some the building’s internal systems and restore the courthouse to its original 1898 condition.

Kennady said the total project would cost around $8.5 million, and that the county already has around $6 million in reserves it set aside last year to pay for the restoration.

The grant application must be submitted to the state by Dec. 1. Kennady said the county should find out whether it will receive the grant by late January.

“This funding is critical because the courthouse really is in bad shape,” said Precinct 3 Commissioner Greg Parker. “Something needs to be done.”
Posted by Sam at 7:06 AM