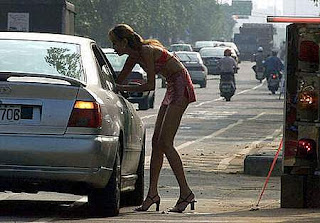 This is a new take on the whole climate-change will destroy man-kind meme.

It puts a whole meaning to 'cap and trade' doesn't it?

And the jury is still out on the whole global warming bit anyway.

The effects of climate change have driven women in communities in coastal areas in poor countries like the Philippines into dangerous work, and sometimes even the flesh trade, a United Nations official said.

Suneeta Mukherjee, country representative of the United Nations Food Population Fund (UNFPA), said women in the Philippines are the most vulnerable to the effects of climate change in the country.

“Climate change could reduce income from farming and fishing, possibly driving some women into sex work and thereby increase HIV infection," Mukherjee said during the Wednesday launch of the UNFPA annual State of World Population Report in Pasay City.

In the Philippines, small brothels usually pop up near the coastal areas where many women perform sexual services for transient seafarers. Often, these prostitutes are ferried to bigger ships by their pimps.

Based on the UNFPA report, there are 92 million Filipinos in the country as of 2009 and that number is expected to balloon to more than 146 million in the next 40 years.

Of the 92 million Filipinos, about 60 percent are living in coastal areas and depend on the seas for livelihood, said former Environment secretary Dr. Angel Alcala.

Alcala said that “we have already exceeded the carrying capacity of our marine environment."

But as the sea’s resources are depleted due to overpopulation and overfishing, fishermen start losing their livelihood and women are forced to share the traditional role of the man in providing for the family.

Alacala, who also heads the Angelo King Center for Research and Environmental Management in Siliman University, said some women often pick out shellfish by the coastlines, which exposed to storm surges.

Women who can no longer endure this work often go out to find other jobs, while some are tempted to go into prostitution, Alcala added.

In an interview with the Inter Press News Agency, Marita Rodriguez of the Centre for Empowerment and Resource Development, Inc. said women are taking the brunt of climate change.

"Aside from their household chores and participation in fishing activity, they have to find additional sources of income like working as domestic helpers in affluent families," she said.

The UNFPA noted that the temperature in the earth’s surface has risen 0.74 degrees Celsius in the past 100 years. The 10 warmest years globally since 1880 have also been recorded in the last 13 years.

“Slower population growth, for example, would help build social resilience to climate change’s impacts and would contribute to a reduction of greenhouse gas-emissions in the future," the UNFPA report said.

The UNFPA suggested five measures to mitigate climate change and overpopulation:
Posted by Sam at 8:57 AM