The audacity of the obvious 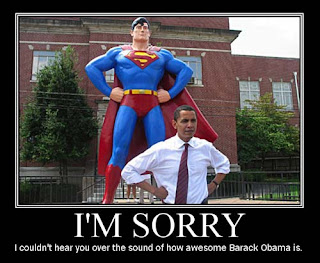 Please tell your party and Congress to stop what they're doing.

Quit piling up the debt and the high-priced, deficit-busting programs.


Obama: Too much debt could fuel double-dip recession

BEIJING, Nov 18 (Reuters) - President Barack Obama gave his sternest warning yet about the need to contain rising U.S. deficits, saying on Wednesday that if government debt were to pile up too much, it could lead to a double-dip recession.

With the U.S. unemployment rate at 10.2 percent, Obama told Fox News his administration faces a delicate balance of trying to boost the economy and spur job creation while putting the economy on a path toward long-term deficit reduction.

His administration was considering ways to accelerate economic growth, with tax measures among the options to give companies incentives to hire, Obama said in the interview with Fox conducted in Beijing during his nine-day trip to Asia.

"It is important though to recognize if we keep on adding to the debt, even in the midst of this recovery, that at some point, people could lose confidence in the U.S. economy in a way that could actually lead to a double-dip recession," he said.

Fox News, which released a transcript of the interview, showed that comment by Obama on Wednesday morning and said the full discussion would be broadcast later in the day.
Posted by Sam at 6:54 AM