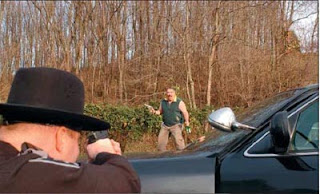 If he decided to commit suicide by cop he got it done.

I'm sorry for his victim's family and his family as well.

New Braunfels SWAT team officers shot and killed a 30-year-old San Antonio man early Wednesday morning after a five-hour manhunt ended in a standoff in the middle of Interstate 35.

Jaime Almaguer was shot multiple times around 3:30 a.m. after being cornered by police on Interstate 35.

New Braunfels Police Department negotiators had been in contact with him by cell phone for several hours leading up to the confrontation.

Almaguer informed negotiators during calls to his cell phone that “he was armed and intended to have a shoot-out with police,” said Lt. Michael Penshorn, spokesman with NBPD.

There were no reported shots fired from Almaguer’s gun, which was recovered next to his body.

The confrontation began shortly before 3:30 a.m. when Almaguer was spotted traveling north on foot along Interstate 35 near the Wal-Mart distribution center north of New Braunfels.

After NBPD SWAT approached Almaguer in their vehicles, he ran across the highway and turned toward police while standing in the southbound lanes of Interstate 35.

Almaguer is suspected of killing his girlfriend in San Antonio Tuesday night, before fleeing to a relative’s house in New Braunfels.

The body of Almaguer’s alleged girlfriend, Jennifer Trader, 25, was found in a bedroom Tuesday night after police kicked in the door to her apartment in the 9000 block of Wurzbach Road in San Antonio. She suffered a single gunshot wound to the head and was pronounced dead at the scene by EMS.

Almaguer’s relatives contacted authorities after he arrived in New Braunfels that night and informed them of the incident. He fled on foot from their house in the 3300 Block of Falcon Grove off Conrads Road north of New Braunfels. He eluded authorities with the Comal County Sheriff’s Office, NBPD and Department of Public Safety for over five hours before he was killed.

An autopsy was under way Tuesday, which will include a toxicology report. The three New Braunfels officers involved in the shooting have been placed on administrative leave, following standard police policy.

Police officers are authorized to use deadly force “to protect themselves and others from serious bodily injury,” said Penshorn.

“If you feel your life or other lives are in danger, you can use deadly force to protect yourself and others,” Penshorn said.

He said this was the first time since the mid-1970s that a New Braunfels police officer shot and killed a person.

Counseling for the officers involved in Wednesday’s shooting is mandated through the city’s Employee Assistance Program. The service is provided at no cost to the officers.

Texas Rangers are conducting an investigation into the shooting. NBPD will use the Rangers’ conclusions in their own internal investigation.
Posted by Sam at 6:20 AM