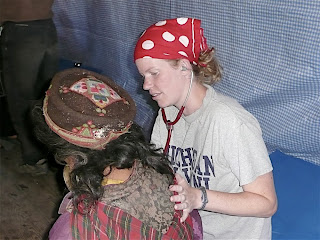 What a wonderful gift to the community.

“Thou shalt love thy neighbor as thyself,” reads the Bible quote painted on the waiting room wall at Volunteers in Medicine in New Braunfels. For Comal County’s uninsured, that room is a haven.

Doctors and dentists volunteer their time and have served more than 3,000 patients since the facility opened in September 2008, helping those who are “caught in the middle” and don’t earn enough for insurance but don’t qualify for Medicaid.

No state or federal funding fills VIM coffers. The major contributor is Oakwood Baptist Church and its charitable foundation. The church owns the land and church parishioners built the building, which is tidy, with glazed concrete floors and meticulous treatment rooms.

Other major contributors include the McKenna Legacy Foundation, the Baptist Health Foundation, and the Kronkosky Charitable Foundation.

Patients include people whose work went from full-time with benefits to part-time. Those moving to Texas to look for work also add to the swelling ranks of local uninsured, Malatek said.

“Because of that demand, we have seen many more patients,” Malatek said.

The downtown facility, a remodeled storefront on San Antonio Avenue, is run as an independent non-profit, but is part of a nationwide network of 70 such facilities.

Three full-time employees work with an army of area volunteers to create an atmosphere devoid of stigma, where neighbors help neighbors, Malatek said.

“I see the need in the community,” said Dr. Dorothy Overman, medical director at VIM and local family practice doctor. She volunteers a half-day each week.

Overman said she works with patients to develop a treatment plan for them that they can afford, often supplying free drug samples, for example, or connecting patients with prescription drug assistance through the McKenna Prescription Access program in New Braunfels.

“If it wasn’t for y’all being here, I don’t know what I would have done,” said patient Sheryl Mckinney of New Braunfels.

Mckinney was in for a follow-up with Overman and called the facility “God-sent.”

Most patients at VIM are adults because most children in need qualify for Medicaid or other government-funded assistance, Malatek said.

There are two full-service dental chairs with digital X-rays. About ten area specialists, including Dr. Melissa Miskell, a gynecologist, and doctors from New Braunfels Cardiology donate their time.

Potential patients must call the clinic to make an appointment. After passing a screening process, including proof of residency and household income, patients qualify for free care.

Malatek said the organization is always in need of contributions. Despite a troubled national economy, donations have not dropped.

In fact, VIM opened when the economy was first hitting hard times in the fall of 2008, and has been able in the past year to meet the needs of increasing numbers of patients, Malatek said.