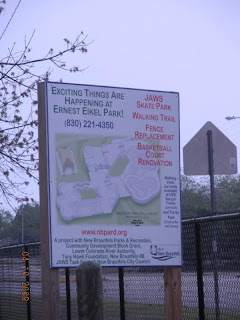 This is a shame.

I hope whoever did this is caught and the plaque gets returned.

Over the weekend, the plaque listing the donors that made the JAWS Skate Park at Ernest Eikel Park possible was ripped from the park’s entrance.

Immediately, a group of skaters were in contact with each other and the police and city parks departments to investigate the case.

They also had leads as to who may have desecrated the park they take so much pride in using and maintaining.

Such self-policing is expected from the skaters that use the JAWS Skate Park.

“Graffiti has been minimal, but what’s happened recently has been vandalism,” said Jim Skinner, who was instrumental in bringing together the groups that led to the park’s creation and completion earlier this year.

“What we believe is happening is that there is one or two individuals that are not skaters (hanging around the park),” Skinner said.

“We try to self-police this park,” he said.

Skinner said while vandalism has become an issue recently, for a public skate park it is cleaner and better maintained than most parks like it in the country.

“We expected about 100,000 skaters to go through it each year, but that number may actually be triple,” he said.

“It’s probably one of the highest uses of a park in the city’s system,” he said, adding that instances of graffiti are nowhere near the level of most skate parks, and that the skaters do their best to keep it clean.

One way of developing the sense of ownership these young (and some old) skaters have for the park was to create the JAWS task force, a group of park users who monitor and maintain the park through an official “friends of the park” contract with the City of New Braunfels. Not only has it developed a sense of ownership for the skaters, Skinner said, but with the contract, the skaters are able to keep the park up more frequently than if they solely relied on parks staff to come by and clean up after them.
Posted by Sam at 6:32 AM