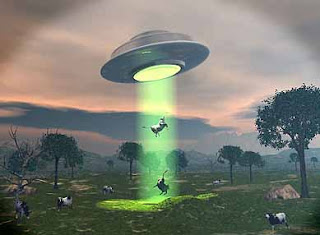 What can I say its a slow news day.

SAN LUIS, Colo. (AP) - A creepy string of calf mutilations in southern Colorado has a rancher and sheriff's officials mystified.

Four calves were found dead in a pasture just north of the New Mexico state line in recent weeks. The dead calves had their skins peeled back and organs cleared from the rib cage. One calf had its tongue removed.

But rancher Manuel Sanchez has found no signs of human attackers, such as footprints or ATV tracks. And there are no signs of an animal attack by a coyote or mountain lion. Usually predators leave pools of blood or drag marks from carrying away the livestock.