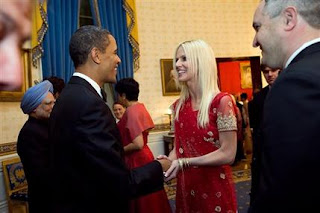 Well, there they are.

Not only not on the guest list but actually holding hands with the President.

You just know some heads will roll over this.

As they probably should.

WASHINGTON (AP) -- This time, the picture is the story.

After the Secret Service insisted that President Barack Obama was never endangered by a security breach that allowed a couple to crash his first state dinner, the White House has released a photo showing that not only did the pair get close to Obama, they actually shook hands and talked to him.

As the White House was disclosing that the Virginia couple, Michaele and Tareq Salahi, met Obama in the receiving line, a "deeply concerned and embarrassed" Secret Service on Friday acknowledged that its officers never checked whether the two were on the guest list before letting them onto the White House grounds.

The White House released a photo showing the Salahis in the receiving line in the Blue Room with Obama and Indian Prime Minister Manmohan Singh, in whose honor the dinner was held. Obama and reality TV hopeful Michaele Salahi are smiling as she grasps his right hand with both of hers and her husband looks on. Singh is standing to Obama's left.