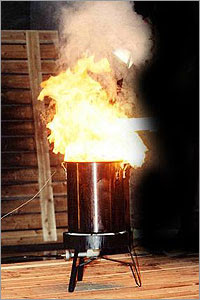 Nothing and no one injured except the turkey and some pride.

Be careful out there folks!!

COLUMBUS, Ohio -- Authorities in Ohio say a turkey fryer caused a house to catch fire as the homeowner was preparing a Thanksgiving meal.

Columbus firefighters say no one was injured in the fire Thursday. They contained it to the back of the two-story house.

The turkey fryer was set up outside near the back door. Capt. Mike Zuber said a propane tank had a worn hose that caused a gas leak, sparking the blaze.

The fire spread to a nearby wood pile and a pickup truck.

The homeowner's identity wasn't immediately released. Zuber says one other family member was home at the time.

Let the experts show you why you shouldn't deep fry a turkey: