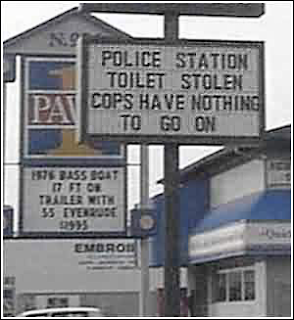 Someone needed one really badly.

By: Will Greenlee -TCPalm.com

PORT ST. LUCIE — In what appears to be a commode caper, someone kicked open the locked front door of a home and absconded with a toilet from the guest bathroom, according to a recently released police report.

The toilet taker also stole “several items of miscellaneous camping equipment” from the garage of the residence in the 1100 block of Southwest Empire Street.

Police reported the front door was forced open and the interior frame broken.

Investigators saw muddy footprints leading from the guest bathroom — where the “unknown brand” toilet had been — to the garage.

The toilet was valued at $150, while the camping equipment, valued at about $500, was taken from the garage.

Neighbors reported seeing nothing unusual over the previous few days.