Bird droppings from the future 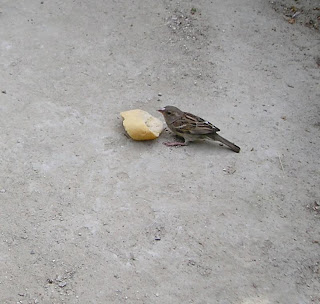 Okay this is pretty bizarre.

Time-traveling birds from the future using baguettes to stop the super-collider from producing Higgs bosons?

Okay, read the article in part below. I'm picking my jaw up from the ground.

Sometime on Nov. 3, the supercooled magnets in sector 81 of the Large Hadron Collider (LHC), outside Geneva, began to dangerously overheat. Scientists rushed to diagnose the problem, since the particle accelerator has to maintain a temperature colder than deep space in order to work. The culprit? "A bit of baguette," says Mike Lamont of the control center of CERN, the European Organization for Nuclear Research, which built and maintains the LHC. Apparently, a passing bird may have dropped the chunk of bread on an electrical substation above the accelerator, causing a power cut. The baguette was removed, power to the cryogenic system was restored and within a few days the magnets returned to their supercool temperatures.

While most scientists would write off the event as a freak accident, two esteemed physicists have formulated a theory that suggests an alternative explanation: perhaps a time-traveling bird was sent from the future to sabotage the experiment. Bech Nielsen of the Niels Bohr Institute in Copenhagen and Masao Ninomiya of the Yukawa Institute for Theoretical Physics in Kyoto, Japan, have published several papers over the past year arguing that the CERN experiment may be the latest in a series of physics research projects whose purposes are so unacceptable to the universe that they are doomed to fail, subverted by the future.

The LHC, a 17-mile underground ring designed to smash atoms together at high energies, was created in part to find proof of a hypothetical subatomic particle called the Higgs boson. According to current theory, the Higgs is responsible for imparting mass to all things in the universe. But ever since the British physicist Peter Higgs first postulated the existence of the particle in 1964, attempts to capture the particle have failed, and often for unexpected, seemingly inexplicable reasons.