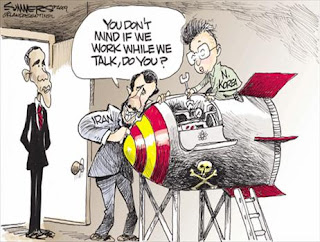 Gee, i hardly know where to start this morning.

Let's start with Iran. When the 'eff are the folks in the State department or this Administration going to wake and smell the coffee?

They have no intention of complying with anything. Never have and never will.

We've been played as patsies. The only country who seems to have a realistic view is Israel.

But I guess that is politically incorrect.

The announcement comes two days after the UN demanded Iran halt construction of a newly revealed enrichment facility near the city of Qom.

The government also ordered the Iranian body to locate sites for another five over the next two months, the media organisation said.

The US has called the expansion plans "another serious violation" of the country's international obligations.

White House Press Secretary Robert Gibbs said: "If true, this would be yet another serious violation of Iran's clear obligations under multiple UN security council resolutions, and another example of Iran choosing to isolate itself.

"The international community has made clear that Iran has rights, but with those rights come responsibilities."

He added: "Time is running out for Iran to address the international community's growing concerns about its nuclear programme."

The new enrichment plants are to be the same size as its main enrichment complex at Natanz.

Mr Ahmadinejad is reported to have said he will not allow an inch of Iranian rights to be wasted.

The cabinet is meeting on Wednesday to discuss plans to enrich uranium up to 20% purity, the president is quoted as saying on the IRIB TV website.

Mr Ahmadinejad said Iran should be producing 250-300 tonnes of nuclear fuel per year, according to IRIB.

The development is likely to add further strain to relations between Iran and Western powers.

The IRIB previously reported that a strong majority of Iranian lawmakers issued a statement demanding the government should not to comply with the International Atomic Energy Agency (IAEA).

"The Iranian nation without a doubt knows that legally its nuclear file has no flaws and wants as soon as possible the case to be returned to the IAEA from the UN Security Council," the statement read, signed by 226 lawmakers.

The statement went on to denounce the resolution as politically motivated and said the US and England are responsible.

Lawmakers also said US President Barack Obama has failed to make the slightest change in policy towards Iran and said he has followed the same path of the hardline administration of his predecessor, George W Bush.