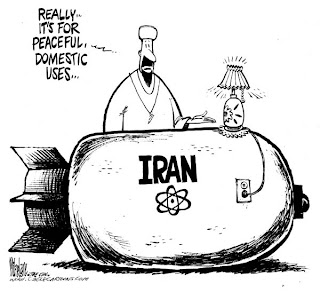 That will be sure to dissuade them from seeking to build nuclear weapons.

TEHRAN, Iran (AP) -- Iran's parliament may consider withdrawing the country from the Nuclear Nonproliferation Treaty in response to a resolution by the U.N. nuclear watchdog censuring Tehran over its nuclear program, a hardline lawmaker said Saturday.

The threats come a day after the board of the U.N. nuclear agency passed a resolution demanding Tehran immediately stop building its newly revealed nuclear facility near the holy city of Qom and freeze uranium enrichment.