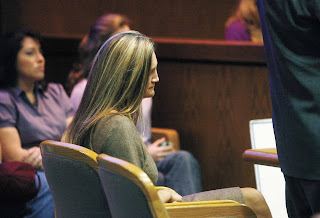 Pointing out all of the inconsistencies and lies pretty much sealed the deal.

I had predicted it wouldn't take too long for a jury to determine Vicker's guilt. I was right.

I'll go so far as to predict a life sentence.

A jury of eight women and four men convicted Janice Vickers of murder Friday afternoon after four hours of deliberation.

Vickers, 48, was accused of intentionally running over and killing 82-year-old Shirley Lindenbaum on Nov. 3, 2006.

After four hours, the jury found Vickers guilty of the murder of Lindenbaum.

Vickers was taken into custody immediately and transported to Comal County Jail. Until today, Vickers had been free on bond.

The jurors were unanimous in their decision after listening to closing statements from the prosecution and defense.

“It’s a ridiculous assumption that (Vickers) killed Lindenbaum for financial gain,” said Mark Clark, Vickers’ attorney. “I have to point out that there was no money taken from her purse and none of her jewelry had been taken from her house.”

The prosecution countered with Vickers’ self-contradicting statements during a voluntary interview she gave police the night of Lindenbaum’s death.

“At the end of the day, she’s guilty of manslaughter – if you believe the statements she made that night,” said Ralph Guerrero, one of two prosecutors from the Attorney General’s office in Austin.

“We’re certain (Lindenbaum) was removed from her home involuntarily,” Guerrero said. “Vickers lied about knowing Lindenbaum. We know that Lindenbaum was alive before the final blow and she was run over multiple times.”

“If my client killed Lindenbaum for financial profit, I have to point out there was no money taken from Lindenbaum’s purse and none of the jewelry had been taken from her home.”

“You don’t accidentally run over a person twice,” said prosecutor Ralph Guerrero. “You don’t accidentally lie to friends and family to make them think you are miles away from (where you are). You tell lies to make yourself look less guilty than you are. There’s only one answer to these lies. The only option is a guilty verdict of murder.”

The jury deliberated for approximately four hours before agreeing on a verdict.

In spite of options allowing them to decide lesser sentences for manslaughter and criminally negligent homicide, the jury convicted Vickers of murder.

Vickers faces up to life in prison. The jury will decide on a sentence after hearing testimony from family and friends, set to begin next week.
Posted by Sam at 6:13 AM