Hanging's too good for him 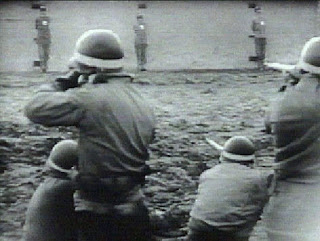 Well, I would certainly hope so.

Personally I also believe if he's convicted give him a firing squad.

Also I'll say it was an act of terrorism or Jihad on his part IMHO. So there, so much for PC.

Okay, for those of you who may think I'm being overly blood-thirsty here, try him first, give him his due process, convict him, then kill him. Feel better, now?

WASHINGTON — Though the suspect in the shooting rampage at Fort Hood could face the death penalty, he will be prosecuted in a military justice system where no one has been executed in nearly a half-century.

Maj. Nidal Hasan, the Army psychiatrist alleged to have killed 13 people at the massive Army installation in Texas last week, might also benefit from protections the military provides defendants that are greater than those offered in civilian federal courts.

Much about Hasan’s case will be decided by a senior Army officer — perhaps Lt. General Robert Cone, Fort Hood’s commander — including whether to seek the death penalty and, in the event Hasan is convicted of capital murder, whether to commute a possible death sentence to life in prison.

Before a military execution can be carried out, the president must personally approve.

George W. Bush signed an execution order in 2008 for a former Army cook who was convicted of multiple rapes and murders in the 1980s, but a federal judge has stayed that order to allow for a new round of appeals in federal court. There hasn’t been a military execution since 1961, though five men sit on the military’s death row at Fort Leavenworth, Kan.

Federal civilian executions also are rare. Three men, including Oklahoma City bomber Timothy McVeigh, have been killed by lethal injection in federal cases since 2001. Death penalties carried out by states are more common — Tuesday night’s execution of John Allen Muhammad in the Washington, D.C., sniper case was Virginia’s second of the year.

In the Fort Hood case, Hasan’s family has hired a private attorney, John Galligan, although the military also will provide a lawyer at no charge. Galligan said that he and Maj. Christopher E. Martin, Fort Hood’s senior defense attorney, spoke with Hasan on Monday and that Hasan had requested a lawyer when first approached by investigators.

Experts in the military justice system said the decision to prosecute Hasan in military court, revealed Monday by officials involved in the investigation, appears clear cut.

The shootings took place on an Army base. The suspect is an Army officer and all but one of those killed also were officers or enlisted personnel. The other person who was killed worked at Fort Hood.

Authorities would have had more reason to take the case to federal court if they had found evidence Hasan acted with the support or training of a terrorist group, but investigators believe he acted alone, without outside direction.

The military system operates under rules that are similar to those in civilian courts. The differences generally give military defendants more rights than their civilian counterparts.

A defendant and his lawyer can be present at the military equivalent of a grand jury hearing, and the lawyer may present evidence and cross-examine witnesses. Lawyers for witnesses and potential defendants are barred from civilian grand juries.

Prosecutors in the military system also turn over many more documents to the defense before trial. “It’s very rare that something in the prosecutor’s file isn’t in the defense file,” said Charles Swift, a former Navy defense lawyer who represented Osama bin Laden’s one-time driver. “What’s taught to prosecutors in military death cases is be overly generous. You’ll win on the facts. You don’t need to play games. In fact, how you’ll lose is to play games.”

At trial, Hasan’s jury would consist of at least 12 officers of higher rank or seniority than Hasan. “This is a very educated jury,” said Duke University law professor Scott Silliman, consisting exclusively of college graduates and possibly including Army generals.

Galligan, Hasan’s lawyer, already has suggested that it could be difficult to receive a fair trial at Fort Hood because of the glare of publicity surrounding the bloody attack, the raw emotions of those who work at the base and President Barack Obama’s emotional visit to the base Tuesday.

But the military law experts said several factors could ease those concerns. The base’s population turns over frequently. In fact, Hasan himself had been there only a short time. “Some of his jurors might be in Iraq or Afghanistan at the moment,” Swift said.

If there were problems finding impartial jurors at Fort Hood, the Army could draw them from virtually any Army facility in the United States.

A military jury must be unanimous to convict and sentence a defendant to death. Imposing a life sentence, however, requires only three-fourths of the jury to agree.

Fifteen members of the military have been sentenced to death in the past 25 years. Commanding generals commuted two of those sentences to life in prison and eight others were overturned on appeal.

The president’s involvement also sets military death-penalty cases apart. The president can commute any federal death sentence, civilian or military but must personally approve each military execution and sign an order to carry it out.

When President Bush signed Ronald Gray’s execution order in July 2008, it was the first time a president had done so in 51 years.

In 1957, President Dwight Eisenhower approved the execution of John Bennett, an Army private convicted of raping and attempting to kill an 11-year-old Austrian girl. Bennett was hanged in 1961.
Posted by Sam at 6:26 AM