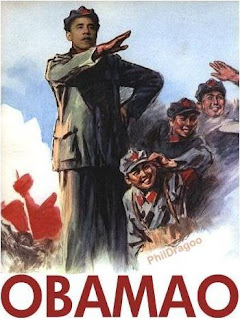 Gee, I don't know, if I went to China I'd want Chinese food.

I'd bet they'd have terrific Chinese food there.

China will host the West Wing this week with tailored American cuisine and a magnificent view over the heart of its capital.

President Obama, along with a star cast from the White House, will be staying at the luxurious suites at the Portman Ritz-Carlton Shanghai and the St. Regis in Beijing upon arrival.

Both hotels, cleared by security agents, were also picked by previous visiting US presidents Bill Clinton and George W. Bush during their trips to China.

To impress the Obama team, the Marriott hotel chain property in downtown Shanghai said it has highlighted American food and drinks.

"We're also hosting a 'Stars and Stripes' week featuring iconic American cuisine," said a hotel spokesperson, who declined to give her name due to company policy.

In Beijing, the St. Regis has been sealed off and is quietly awaiting the arrival of Obama's motorcade this evening.

Obama's presidential suite at the hotel is located on the 19th floor, the best location of the compound.

Access to the presidential suite was politely turned down by hotel staff yesterday, but a peek from rooms on the 18th floor gives a beautiful panorama over the east section of Chang'an Avenue, as well as Beijing's embassy area.

The hotel became a restricted zone yesterday evening. Motorcades of the Foreign Ministry's escort team and the US embassy lined up in the parking lot. Luxury shops and a VIP gym inside the compound were ordered to stay closed today and tomorrow during Obama's visit.

The Portman Ritz-Carlton in Shanghai has also strengthened security measures and floors hosting the Obama team were cordoned off yesterday.

Although details of Obama's accommodation remain largely unknown, local Chinese said the US president should not miss China's traditional attractions on his maiden trip.

Obama's tour of old Beijing will include the Great Wall and the Forbidden City.