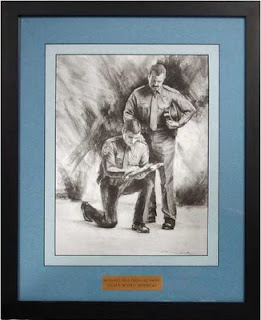 My condolences and prayers go out to the families and friends of the fallen officers.

As well as to the community.

This is a tragedy.

UPDATE: More of a tragedy than I suspected. This perp should have still been in jail. Here's an excerpt from a blog by Michelle Malkin.

"Maurice Clemmons, the 37-year-old Tacoma man being sought for questioning in the killing of four Lakewood police officers this morning, has a long criminal record punctuated by violence, erratic behavior and concerns about his mental health.

“This is the day I’ve been dreading for a long time,” Larry Jegley, prosecuting attorney for Arkansas’ Pulaski County said Sunday night when informed that Clemmons was being sought in connection to the killings.

Clemmons’ criminal history includes at least five felony convictions in Arkansas and at least eight felony charges in Washington. The record also stands out for the number of times he has been released from custody despite questions about the danger he posed.

Clemmons had been in jail in Pierce County for the past several months on a pending charge of second-degree rape of a child.

He was released from custody just six days ago, even though he was wanted on a fugitive warrant out of Arkansas and was staring at eight felony charges in all out of Washington state.

Clemmons lives in Tacoma, where he has run a landscaping and power-washing business out of his house, according to a police interview with his wife earlier this year.

He was married, but the relationship was tumultuous, with accounts of his unpredictable behavior leading to at least two confrontations with police earlier this year.

During the confrontation in May, Clemmons punched a sheriff’s deputy in the face, according to court records. As part of that incident, he was charged with seven counts of assault and malicious mischief.

In another instance, Clemmons was accused of gathering his wife and young relatives around at 3 or 4 in the morning and having them all undress."

Suspect in Lakewood police slayings wounded, may be dead
www.king5.com

SEATTLE, Wash. – A suspect in the slaying of four Lakewood, Wash., police officers gunned down in a suburban coffee shop was holed up at a Seattle house early Monday, wounded and possibly dead, police said.

Police used a loudspeaker, flashbangs and what appeared to be tear gas on a building in Seattle's Leschi neighborhood early Monday where suspect Maurice Clemmons was believed to be located.

Clemmons was shot and wounded during the attack on the four officers Sunday morning, police said, and it was unclear what his condition was, or if he was even in the building.

Clemmons has an extensive violent criminal history from Arkansas, including aggravated robbery and theft. He has also recently been arrested and charged in Pierce County for assault on a police officer and for rape of a child. After hours of calling Clemmons a "person of interest," Pierce County Sheriff's Office spokesman Ed Troyer declared Clemmons a suspect early Monday.