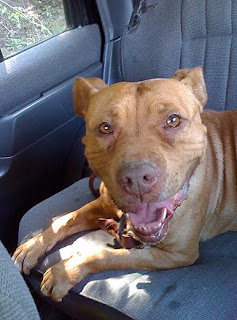 Looks like he picked the wrong time and car to do this.

A pit bull rescued earlier from an illegal dog-fighting ring was sitting inside in the car - and that dog wasn't taking any more passengers.

She says Victor the pit bull was due to be put down a few months ago after he and more than 20 other dogs were found living in horrific conditions - beaten, forced to fight and chained inside filthy kennels.

But a dedicated rescue group believed this dog could be saved and - after months of rehabilitation - placed him with Amber and her family.

On Friday night, Victor had a chance to return the favor in a grocery parking lot.

Amber says she stopped by the store on a routine shopping trip and brought 3-year-old Victor along for the ride.

"I opened the door like this and put the groceries in," she says.

"I was just reaching for my seatbelt, and right as I was turning to click it in, this door flew open. And he was just standing right there."

Amber found herself face-to-face with a possible car-jacker. The man spooked Victor, too - but the dog was quick to act.

"He turns around and lets out just this gigantic woof," says Amber. "And this man throws himself backwards, trips on himself and falls down."

Police later arrested the man. And thanks to Victor, Amber wasn't hurt.

She says Victor still bears the battle scars from being routinely beaten and forced to fight before he was saved last October from a dog-fighting ring in Graham.

"He's got tears inside his ears; his biggest one is the lip. This lip is supposed to be attached, not kind of poking out," Amber says.

Bullseye Dog Rescue and other shelter workers put the dogs through months of rehabilitation. Ultimately, most had to be put down.

"They didn't make it. They had some various behavioral problems ... because of the victims that they were, the cruelty they endured," says Lorrie Kalmbach of Bullseye Dog Rescue.

Victor was the exception - and Amber says he proved himself exceptional against the car-jacker.

She'd keep him if she could, but for now has agreed to be his foster mom until he can be placed.

Victor and two other pit bulls named Hope and Phoenix have gone through months of rehabilitation and are ready and willing to be adopted into a good home.
Posted by Sam at 8:03 AM