Nothing to worry about here, move along 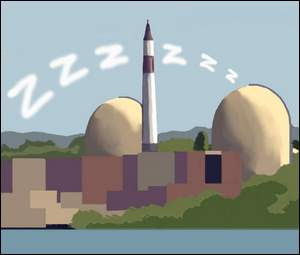 Why am I worried?

This doesn't mean anything, right?


Al-Qaeda Suspect From NJ Worked At 6 Nuke Plants
HADDONFIELD, N.J. (AP) ―An American seized in Yemen in a sweep of suspected al-Qaida members had been a laborer at six U.S. nuclear power plants, and authorities are investigating whether he had access to sensitive information or materials that would be useful to terrorists.

Sharif Mobley, 26, worked for contractors at plants in New Jersey, Pennsylvania and Maryland from 2002 to 2008, mostly hauling materials and setting up scaffolding, plant officials said.

Nuclear Regulatory Commission spokesman Neil Sheehan said Friday that investigations are under way into which areas Mobley entered. But he noted that areas containing nuclear fuel are tightly controlled, and that a laborer typically would not have access to security information or other sensitive matters.

The plants are also checking areas where Mobley worked to ensure everything is in order, said NRC spokeswoman Diane Screnci.

Mobley, a U.S. citizen of Somali descent, has not been linked to any wrongdoing at any of the plants. And officials said nothing he did when he worked there aroused any suspicion.

Nevertheless, Edwin Lyman of the Union of Concerned Scientists, an industry watchdog, said the case raises questions about security at the nation's nuclear plants.

"The real question is: Was there information that the NRC or utilities could have seen that would have led to his disqualification?" Lyman said.

Mobley, a Muslim who grew up in Buena, N.J., was among 11 al-Qaida suspects rounded up earlier this month in Yemen. He was taken to a hospital there over the weekend after he complained of feeling ill. Yemeni officials said he snatched a gun and shot a security guard to death in an attempt to escape from the hospital.

He has not been accused by authorities in the U.S. or Yemen of attempting to make a bomb or attack a nuclear plant.

His parents have said he is not a terrorist, though former friend Roman Castro said Mobley was becoming increasingly radical in his Muslim beliefs before he moved to Yemen about two years ago.

Mobley worked for contractors at the Salem and Hope Creek nuclear plants in New Jersey from 2002 to 2008; the Peach Bottom, Limerick and Three Mile Island plants in Pennsylvania from 2003 to 2007; and Calvert Cliffs in Maryland for two weeks in 2006, operators said.

Company officials said most of his work came during periodic refueling outages, when hundreds of contract employees descend on the plants. The workers do a variety of jobs, but "nothing technical," said Curt Jenkins, business manager at Mobley's union, Local 222 of the New Jersey Laborers Council.

Mobley had "vital access" that allowed him into any area of the plants where he worked in New Jersey, Jenkins said. But guards were posted in the most sensitive places, and "anywhere that you might be able to do anything, they pretty well got that pretty secure."

Every worker entering a plant has to clear security, explosives and radiation checkpoints, and that information is recorded, the NRC's Sheehan said. The plants also teach employees to recognize and report suspicious behavior.

Jenkins said that he never saw any sign of trouble from Mobley and that he was a union member in good standing. "He always treated us with respect," he said. "Very well-mannered."

Mobley's work came during a period in which nuclear plant security was increased in the wake of the 9/11 terrorist attacks.

Steve Kerekes, a spokesman for the industry group the Nuclear Energy Institute, said that before regulations changed in 2003, workers could gain temporary access to plants before their screening was complete. It was not immediately clear whether Mobley had access before he was completely cleared.

"To the best of our knowledge, with the regard to this individual, there was nothing to suggest any kind of problem with him," Kerekes said. "We have a personnel database that's in place that lets all our companies across the industry know instantaneously if someone is for some reason denied access or flagged for some other kind of reason related to their behavior."

However, the information shared between nuclear power companies is sometimes incomplete, said Lyman, of the Union of Concerned Scientists.

A law enforcement official says Mobley traveled to Yemen with the goal of joining a terrorist group. The official spoke on condition of anonymity because the investigation is still going on.

A second official, also speaking on condition of anonymity, says the U.S. government was aware of Mobley's potential extremist ties long before his arrest. The official did not say how long the government had been paying attention to him.
Posted by Sam at 8:08 AM